Envenio's Ian McLeod will present to delegates at the Teledyne CARIS Conference 2017 in Ottowa, that takes place 17-22 June. His paper, entitled 'High Resolution 3D Mapping For Current, Turbulence and Sediment Transport' highlights a notable, revolutionary ability to being able to study a subsurface environment at a high resolution, thanks to the advancement and availability of computational fluid dynamics (CFD) techniques.

CFD solves the Navier Stokes equations in three dimensions and produces contiguous data fields that extend horizontally over large areas and vertically throughout the water column. Data fields include mean current and heading, hydrodynamic turbulence, and a variety of transported quantities such as temperature, sediment and contaminants.

This type of modeling was not previously part of the hydrographer's toolkit because of high compute costs and long solution wait times, leaving experiment as the only viable alternative. This application is an example of a case that is now feasible due to CFD solver EXN/Aero. This simulation tool reduces solve times by up to 20x, is hosted on an HPC cloud, and has an affordable pay-per-use pricing model. The goal of this tool is to help CFD become more pervasive in the engineering world.

CFD provides a powerful augmentation to experimental techniques. It enables analysts to fill in gaps between sparse sample locations and obtain a more complete picture of the flow.

In this study, Ian describes a concept methodology for computing the flow field and an approximation of sediment transport in section of the Saint Lawrence River.

The CFD domain extends (approximately) from the Quebec-Levis ferry route downstream to the eastern tip of Ile aux Grues. Bathymetric contour and surface current data was obtained from the the Canadian Hydrographic Service.

CARIS BASE Editor tools were used to pre-process bathymetric data sets. Envenio constructed a ~10m computational mesh and ran the CFD simulation using its EXN/Aero CFD solver for peak and off-peak flow rates under steady-state conditions. Post-analysis was then performed in CARIS BASE Editor.

Results of this study are relevant to managers of seaways and harbours that need to predict the effect on currents and sedimentation as they plan changes to shoreline features and breakwaters.

"Bathy DataBASE and EAM do a good job of modelling the current and past state of important infrastructure – such as waterways" says David Brodie, Product Manager of Engineering Analysis Module (EAM).

"Knowing in advance how the infrastructure will change over time, or understanding the knock-on effects of dredging operations through the CFD simulations that Envenio specialize in would seem to be a natural complement for the existing decision-making opportunities in CARIS software." he adds. 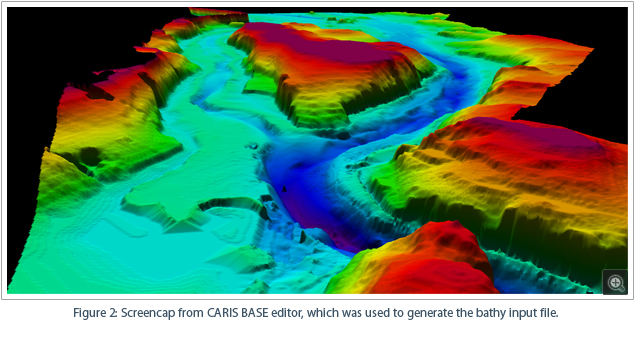 Ian McLeod holds a Master of Science in Mechanical Engineering from the University of New Brunswick and is a Professional Engineer registered in the Province of New Brunswick. His studies and early career focused largely on experimental and computational fluid mechanics. In the role of CEO at Envenio in 2010, he leads a team that is significantly reducing the cost of high-performance for CFD users worldwide. International clients continue to embrace the EXN/Aero software, and you can find out more about this here.
www.envenio.ca | +1 506 472 5177

The timing of the conference coincides with Canada's 150th year anniversary; the city will be alive with multicultural events, showcases, and people. Beautiful heritage buildings and famous landmarks are prominent in the city centre. They tell stories of the past as well as the direction of the future. Parliament of Canada acts as the centerpiece of Ottawa, while representing the heart of the country's democratic government. The Rideau Canal, a UNESCO World Heritage Site, is a brilliant waterway which cuts through Ottawa's downtown, sharing nearly two centuries of stories and history.

Aligning the conference, location, and theme of "Celebrating 150 Years of Hydrography and Geomatics in the Nation's Capital", creates an atmosphere of community for CARIS Software users – new and old.