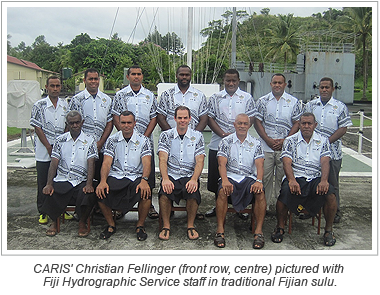 The role of the Fiji Hydrographic Service (FHS) is to provide up-to-date hydrographic information to meet the needs of government departments, merchant shipping and all other public and commercial interests with the main focus being on safe navigation and safety of life at sea. The objectives focus on the waters encompassed by its Exclusive Economic Zone (1,134,700 sq km at sea) and includes the territorial seas and inland waters. The FHS was initially under the control of the Fiji Islands Maritime Safety Administration (FIMSA) and officially entered into the Fiji Navy in 2010. In doing so, the responsibilities and obligations of the office came under the Navy’s operational command.

The FHS has been using manual methods for the production of Fiji National Charts since 1986, due to the lack of adequate IT infrastructure locally. As part of a modernization strategy CARIS was awarded a contract to implement a digital chart production system, which included the necessary hardware, software and training in order to produce new charts, new editions and maintain existing paper charts in a more efficient way. CARIS has delivered its Ping-to-Chart™ desktop solution along with five weeks of on-site training and consulting. CARIS' Christian Fellinger was on-site with the FHS for system implementation and initial training in March of this year. This included topics on bathymetric analysis and compilation, as well as paper chart and Electronic Navigational Chart (ENC) production and maintenance.

Future on-site training sessions will focus on advanced aspects of paper chart and ENC production, as well as the creation and management of nautical publications, such as Notice to Mariners and List of Lights.