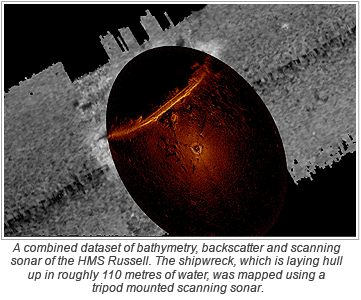 In the early morning hours of April 27, 1917, the pre-Dreadnaught battleship HMS Russell was steaming ahead just north of Valetta Harbour, Malta when she was rocked by a sequence of explosions. Several mines laid by the German submarine U-73 had punctured its hull and ultimately resulted in its sinking, taking the lives of 126 crew members. In command of the HMS Russell at the time was then Lieutenant Commander John Cunningham, who would go on to lead the landings at Anzio and Southern France during the Second World War and would become First Sea Lord of the British Navy in 1946.

With the backdrop of the First World War centenary, the second edition of the Seafloor Exploration training course was conducted in Malta during the first two weeks of September. Students spent ten days covering many different theoretical and practical aspects of seafloor mapping, including a one day certified CARIS training course among other software and hardware tutorials. As part of field work, a day was spent surveying a newly discovered black coral reef on the southern coast of the island with a Remotely Operated Vehicle (ROV), piloted by Underwater Management Services' Pierre Bellizzi. 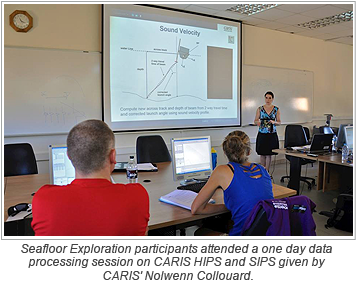 The most exciting exercise of the training course was the expanded investigation of the HMS Russell shipwreck using the ROV and mapping it at high resolution using a tripod mounted Kongsberg MS1000 scanning sonar. The shipwreck was found laying hull up in roughly 110 metres of water. The scanning sonar was deployed to map the starboard side of the wreck. The 2014 survey augmented several years of multibeam data as several features were detected that would have been very difficult to properly ensonify with the hull mounted sonar due to their geometry or small size.

Additionally, a wreck mapped for the first time last year was also explored with the ROV and MS 1000 to confirm the vessel's identity. As it turns out the wreck was not a new discovery, but does confirm the final resting place of the HMS Aegusa. In a strange twist of fate, the HMS Aegusa sank on the April 28, 1916 after striking a mine also laid by U-73, while trying to rescue survivors of the HMS Nasturtium, which sank in the same minefield.