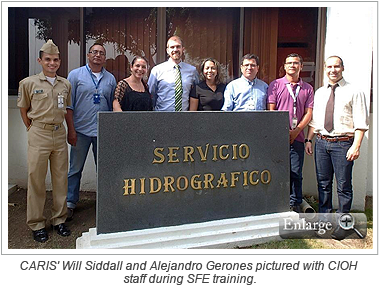 During the first week of March CARIS completed the implementation of CARIS Spatial Fusion Enterprise (SFE) at the Centro de Investigaciones Oceanográficas e Hidrográficas (CIOH) of the Colombia Navy in the city of Cartagena de Indias, Colombia.

CARIS staff were onsite to provide consultancy and train Navy technicians on the use of SFE as a tool for sharing hydrographic data using the Open Geospatial Consortium (OGC) standards. The training also included the configuration of the software on local servers. This was done as part of a project for the renovation of cartographic and hydrographic production methods at the Colombian Navy, which entails the implementation of CARIS HPD, currently in progress, and CARIS Bathy DataBASE which is already in operation.

With the utilization of SFE, in addition to the CARIS database production systems, CIOH has taken an important step in establishing a marine spatial data infrastructure and will be able to share data with the Navy headquarters in Bogota and other Navy deployments around the country.