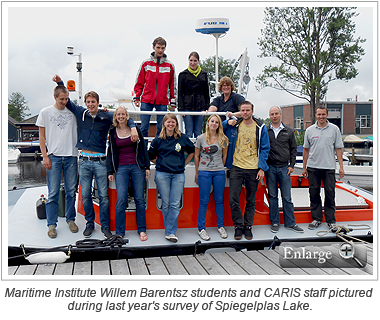 The Maritime Institute Willem Barentsz (MIWB) in the Netherlands joins the CARIS Academic Partnering Program with CARIS HIPS and SIPS and BASE Editor for hydrographic data processing. The program provides academic institutes with CARIS software used by industry, allowing students to gain valuable hands-on experience prior to entering the workplace.

The maritime institute is located on the island of Terschelling in the northern Netherlands and was named after the Dutch cartographer, navigator and explorer, Willem Barentsz, who was born on the island. Barentsz was most famous for his search of a northern route between Europe and South East Asia.

The maritime institute has its own survey vessel, the Octans, which is a former research vessel of Rijkswaterstaat, the Ministry of Infrastructure and Environment. The vessel is equipped with a multibeam echo sounder, motion reference unit (MRU) and Real Time Kinematic (RTK) Global Positioning System (GPS). Furthermore, the maritime institute also has a small survey launch that is equipped with a dual frequency single beam echo sounder and RTK GPS.

Part of the ocean technology course is the annual CARIS lake survey, which is in its second year. Having surveyed the Spiegelplas Lake last year, students will survey the Wijdeblik Lake this year.