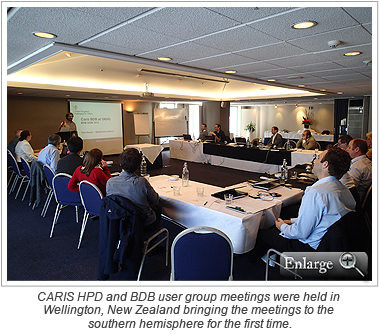 CARIS users were recently in Wellington, New Zealand for the annual CARIS Hydrographic Production Database (HPD) and Bathy DataBASE (BDB) user group meetings. This was the first time the meetings were held in the southern hemisphere, which attracted a number of new participating agencies.

CARIS user group meetings are meetings chaired by CARIS users. These meetings have proven to be invaluable as they provide a unique opportunity for users to share their production experiences and implementation techniques amongst each other. Land Information New Zealand (LINZ), a long time CARIS user, graciously volunteered to host the meetings this year, which were chaired by LINZ’s Kristian Jones and Glen Rowe.

In addition to being the first user group meetings in the southern hemisphere, the 2013 meetings were the first time the HPD and BDB user group meetings were held in the same venue running consecutively, allowing many of the delegates to attend both meetings. This proved to be a valuable addition as it also allowed for a joint meeting day where topics of interest for both groups were presented and discussed, including integrated workflows between HPD and BDB.

During the user group meetings, participating users presented their work with CARIS software and brought new topics to be discussed by the groups, with CARIS representatives giving their feedback throughout the meetings. CARIS presented the latest in new software developments for HPD and BDB and also discussed the evolving implementation of S-100 and how S-100 is already being utilized in available components of the CARIS Ping-to-Chart™ solution.

As meeting chair, LINZ provided a visit to their facilities where attendees were greeted by a traditional Maori welcome, which involves speeches and singing. This was followed by in-depth presentations of LINZ’s organization and work by various LINZ team members. After the visit to LINZ, participants enjoyed a guided tour of the lovely Museum of Wellington City and Sea. The day finished with a social event sampling some of New Zealand’s impressive gastronomic offerings.