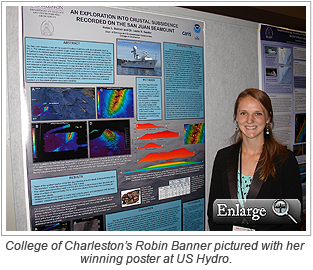 During the recent US Hydro 2013 conference held in New Orleans, Louisiana, undergraduate and graduate geology students participated in a poster session showcasing their research projects.

Awards were given to the top poster presentations during the conference. Undergraduate student Robin Banner, from the College of Charleston’s BEAMS (BEnthic Acoustic Mapping and Survey) program, won first place for her research poster, An Exploration into Crustal Subsidence Recorded on the San Juan Seamount.

The San Juan Seamount lies off the coast of Southern California with its shallowest depth at 560 metres. The majority of California Borderland seamounts are smooth and sediment covered, whereas the San Juan Seamount is one of the few to exhibit weathered grooves and worn rocks. Past exploration of the seamount and the collection of rock samples revealed numerous sub-aerial features, such as coastal cliffs and cobble beaches. A slight break in the seamount’s slope was detected suggesting that the San Juan Seamount was an island before it subsided between 550 and 700 metres, likely since the late Miocene period. In 2011, the NOAA Ship OKEANOS EXPLORER conducted a survey of the seamount and adjacent abyssal region. The data was processed using CARIS HIPS and SIPS to produce a CUBE BASE Surface and backscatter mosaic to reveal new insights into past crustal subsidence.

To view the full academic poster visit the CARIS website.