On Thursday, May 18th, 2006, Dr. Salem Masry, CARIS President and CEO, accepted an Honorary Doctor of Science Degree from the Board of Governors of the University of New Brunswick. 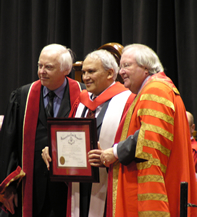 The degree was conferred upon him at the 177th Spring Encaenia at the Aitken University Centre of the Fredericton campus.

Recognizing his expertise in computerized mapping and geographic information systems, Dr. Masry received this Degree before graduates in the faculties of science, engineering, forestry and environmental management, and computer science.

Speaking with Dr. Masry on the subject he noted, "I am receiving this degree in recognition of the success of CARIS. This presentation comes as a result of the hard work and dedication of CARIS' current and previous employees from Canada, The Netherlands and United States".

Salem Masry is founder, president and CEO of CARIS. A professor at UNB for 20 years, Dr. Masry achieved international recognition in the fields of computerized mapping and geographic information systems (GIS). He developed, or co-developed several new ideas in the field of geomatics, co-invented and patented a technique for laser plumbing in mining, and developed a series of digital mapping courses that became the basis for UNB's GIS program. He also initiated several digital mapping research projects, including a project to investigate mapping of Canadian coastal waters using photogrammetry. This project led him to found CARIS in 1979. Dr. Masry left UNB in 1986 to devote himself to the management of the company.