The Panama Canal Authority has successfully completed the first round of tests in the installation of its new Electronic Navigational Chart (ENC) system utilizing CARIS software at the Simulation Center, Research and Development Maritime in Panama. This new system will make navigation in the Panama Canal both safer and more efficient.

Currently the Panama Canal carries around 13,000 oceangoing transits per year with a total weight of 300 million tons. This amount of traffic is close to capacity for the canal, making the safe and efficient handling of transport paramount. The new system will also enhance maritime security, as well as providing more cartographic information, allowing greater precision when navigating through the waterway.

The Panama Canal Authority worked in close partnership with CARIS to provide the data components of the cartographic database of the Panama Canal. This included information relating to the new locks and the depths of the various areas of the sea route. CARIS provided the expertise, training and support to fully utilize the selected CARIS software. The Panama Canal Authority acquired BASE Editor for the creation and management of bathymetric surfaces and S-57 Composer for the production of ENC's.

The project entailed the creation of two main electronic charts: one for the Atlantic coast and one for the Pacific coast, as well as other more specific cartographic products within the canal. These ENC's are initially being used in a simulator as part of the training program for the canal pilots. In the future the ENC's will be mandatory for any vessels approaching or intending to transit the canal. 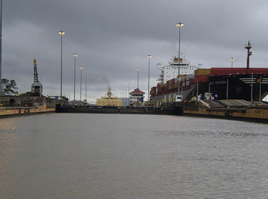 Alejandro Gerones, CARIS account manager for Latin America commented, "We are extremely pleased that the Panama Canal Authority has taken on ENC production and has selected CARIS technology to produce their Electronic Navigation Charts. The best solutions involve combining the most advanced and powerful software with the provision of our expertise to train the users. The Panama Canal Authority has joined a vast global community who have benefited from the CARIS solution."

Alejandro Lu, chief of cartography at the Panama Canal confirmed the benefits, "The new charts will help to reduce the number of accidents in the canal and allow us to save millions of dollars in insurance."