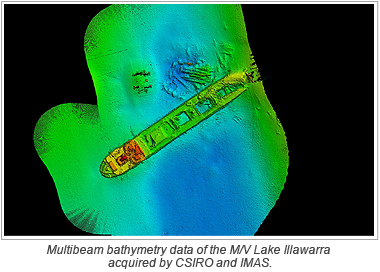 Earlier this year, Matt Boyd and Stuart Edwards from the Commonwealth Scientific and Industrial Research Organisation (CSIRO) Geophysical Survey and Mapping team acquired multibeam bathymetry data over the wreck of the M/V Lake Illawarra, which lies under the Tasman Bridge in Hobart, the capital city of Tasmania.

The M/V Lake Illawarra is a 34 metre long, bulk carrier of 7,274 tons which collided with the Tasman Bridge on the evening of the January 5, 1975, resulting in the deaths of 12 people. A 126 metre section of the bridge collapsed onto the deck of the ship causing her to sink under the bridge where she currently lies in 34 metres of water. The collapse of the bridge caused significant challenges in Hobart and the social consequences for the city were far reaching; east and west Hobart were separated for years while the bridge was rebuilt.

The CSIRO Geophysical Survey and Mapping team took delivery of a Kongsberg EM2040c high resolution multibeam echosounder earlier this year and while completing a project in conjunction with the Institute of Marine and Antarctic Studies (IMAS) from the University of Tasmania (UTAS), had the opportunity to map the shipwreck while calibrating the system in the Derwent River.

The raw data from the EM2040c was processed within CARIS HIPS and SIPS. The data was examined with HIPS and SIPS to remove any navigational or motion outliers, tidal corrections applied and then merged. The creation of various field sheets allowed products to be developed for different interested parties including the Tasmanian Maritime Museum.