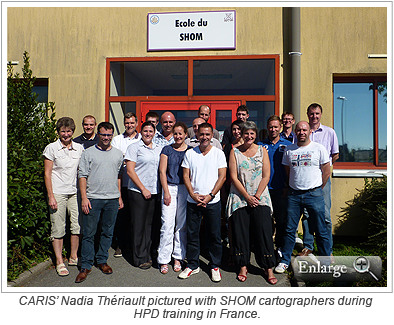 One year ago, Service Hydrographique et Océanographique de la Marine (SHOM) set up a pilot project at their cartography department with five cartographers for the implementation of the CARIS Hydrographic Production Database (HPD) suite tools. Tests were conducted for paper chart and Electronic Navigational Chart (ENC) productions in order to replace the current production system based on CARIS GIS and HOM ENC applications, supplemented by in-house software.

The first HPD training session for 14 cartographers was held at SHOM’s school in Brest, France. This consisted of a four week training course on HPD modules; two weeks of training by CARIS’ Nadia Thériault on Source Editor and Product Editor, followed by two weeks of training by SHOM trainers. The aim of the second part was to train the cartographers on how to use the HPD tools in SHOM contexts, such as new procedures and workflows.

Following the training course, the ENC chart department began to use this new production system, and SHOM released its first ENC using CARIS HPD approximately one month after. The first ENC produced is located in Saint-Laurent-du-Var, France on the French Riviera. All new publications and editions of ENCs are now being produced and maintained with HPD. In the coming months and years, the 400 ENCs in service are planned to be migrated into HPD and SHOM aims to publish 500 more ENCs across the regions and territories where France oversees cartographic responsibility.