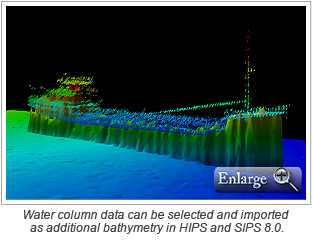 CARIS is pleased to announce the release of CARIS HIPS and SIPS 8.0, the leading hydrographic data processing system. The much anticipated release of HIPS and SIPS 8.0 includes some significant enhancements, such as the continued implementation of water column data processing allowing the data to be supplemented into the bathymetry, the redesigned calibration tools in Subset Editor and the new HIPS project database allowing for faster open times and multi-user access.

The Calibration module has been redesigned for improved usability and workflow. The Calibration tools have been migrated to the latest interface and tools in Subset Editor allowing users to utilize simple and intuitive controls.

The new *.hips file for HIPS and SIPS projects is a database that provides several advantages, including management of multi-user access to the data. The project database also significantly improves the performance of opening a project. Testing on a project containing hundreds of track lines shows open times dropping from several minutes to only a few seconds.

CARIS clients who have a valid CARIS subscription can now download HIPS and SIPS 8.0 from the CARIS Online Customer Services website. Individuals new to HIPS and SIPS can contact info@caris.com for more information and a quote.