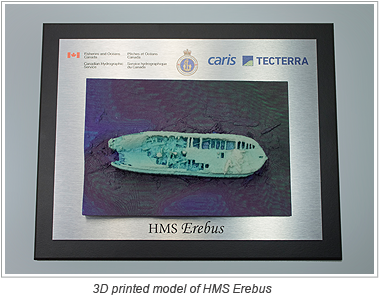 The models were printed from the multibeam sonar data collected by Fisheries and Oceans Canada’s Canadian Hydrographic Service. The bathymetric measurements were processed in seafloor mapping software created by the New Brunswick-based company CARIS and subsequently exported for use in a 3D printer provided by the Calgary-based non-profit TECTERRA.

The high precision models are scaled representations of HMS Erebus as it currently sits on the seafloor in the eastern waters of Queen Maud Gulf.  The level of detail in the models provides a clear view of the vessel’s current structure, and even shows details of the wooden beams and materials surrounding the wreck, as well as one of its anchors that rests off the port side. Being able to generate the models adds extra value for Parks Canada archeologists and divers from the Royal Canadian Navy’s Fleet Diving Unit Atlantic as they prepare for their April dive operations into the wreck as part of Operation Nunalivut 2015. 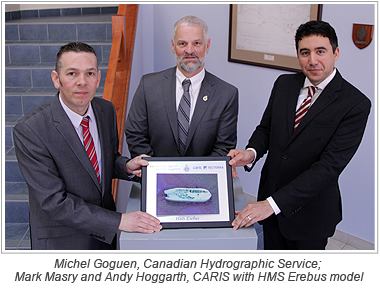 "Canadian innovation continues to play a major role in the ongoing successful efforts to explore, research and understand our maritime history. It is a privilege to watch traditional means and modern technologies come together to create a deeper understanding of the Arctic and our Canadian identity."
- Keith Ashfield, Member of Parliament

"Canada is a recognized global leader in the field of geomatics. It’s an honour to see Canadian software used to map this significant and historical shipwreck, and the added element of 3D printing provides an innovative means of transforming a scientific dataset into a product that a much broader audience can directly appreciate."
- Dr. Salem Masry, CEO and President, CARIS.

"As a Canadian geomatics technology innovation support centre, we are honoured to have the opportunity to support historically significant deployments, such as the mapping of HMS Erebus. Through the use of TECTERRA’s 3-D printer, we were able to print high precision models of HMS Erebus as it sits today on the ocean floor."
- Jonathan Neufeld, Director of Commercialization Programs at TECTERRA

The model of HMS Erebus will also be on display at the Ocean Business conference in Southampton, UK, April 14th to 16th, stand N10.