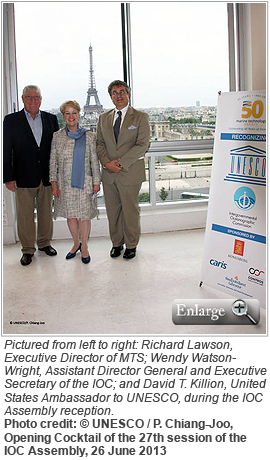 Since its foundation in 1960, IOC-UNESCO has been promoting international cooperation and coordinating programs in marine research, observation systems, and capacity development to support its Member States by facilitating the development and sharing of knowledge that is essential to the sustainable management of the marine environment.

An evening reception was held on the opening day of the IOC Assembly, which was hosted by Wendy Watson-Wright, Assistant Director General and Executive Secretary of the IOC and Marine Technology Society (MTS), with remarks by David T. Killion, United States Ambassador to UNESCO. As a member of MTS, CARIS was honoured to sponsor the IOC Assembly reception. CARIS BV’s Charles de Jongh attended the reception to represent CARIS at the event.